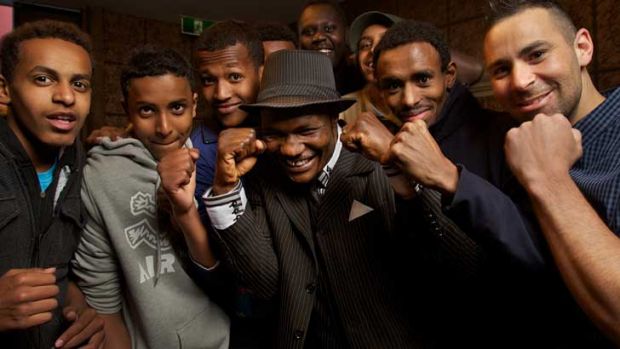 The world champion boxer has blown away cliches about race and age in the 16 years he has lived in Australia. Now he hopes to push the boundaries even further and extend his hand to others, particularly the African youth who are trying to find their way in a new country.

Ndou, 41, fought his way out of the Johannesburg slums to become not just world champion but a practising lawyer in Sydney, specialising in family law and crime.

He’s says he’s fulfilled his boxing ambitions and now wants to use his profile to help African youth, starting with the donation of his boxing earnings to charity. He has former world champion Britain’s Ricky Hatton in his sights, with the promise of a substantial payday.

“For me it’s more about helping kids,” he said. “I plan to travel around the world and donate my purse to chosen charities. The whole thing is trying to keep the children out of trouble.”

“I’ve read stories that these kids from Sudan are having a lot of problems and I would like to be the person that can prove to them and show them that of course we do come from a very bad background and we’ve been exposed to violence, crime and all that. But we can change.”

He will take on another African boxer – Cameroon’s Rivan Cessaire, who settled in Melbourne after the 2006 Commonwealth Games – this afternoon at the Melbourne Pavilion in Flemington.

Watching closely will be young African community leaders, who also hope to follow in Ndou’s footsteps and make a difference.

Maki Issa, 21, was born in Djibouti and last week received a community leadership award from the Australian Federal Police for his work creating a much-needed soccer club in Flemington as well as the Flemington Theatre Group, which just finished a season at the Malthouse.

He described Ndou as the perfect role model. “We don’t have a lot of people like that to look up to,” said Mr Issa.

Ndou grew up in a world of poverty, violence and racism in apartheid South Africa until his fighting skills brought him to Australia to appear on a Kostya Tszyu undercard in 1995.

“I loved the country and thought this is one place I’d love to raise my kids,” he said.

“I’ve seen everything: violence and guns, and I’ve had friends die in my arms.”

He returned the following year with his wife and baby daughter and trained with the legendary Johnny Lewis. Ndou distinguished himself against some of the best fighters of his generation in a 63-fight career.

He often returns to his homeland and hopes to enter politics there. Getting a law degree, he knew, was a stepping stone, but there was another reason. “I hated lawyers. Then when I took my career to America I realised all the managers and promoters were lawyers… Now I look at law and boxing and they’re interrelated. You need to have a bit of mongrel in you if you want to win.”